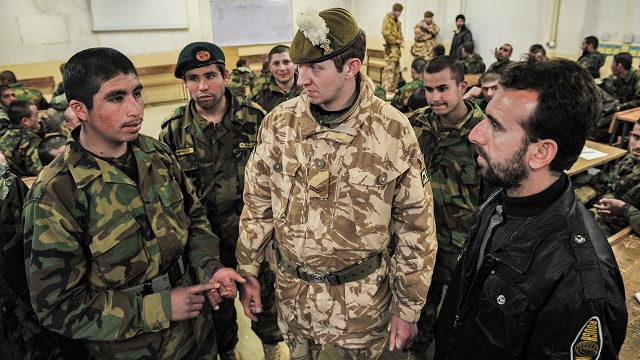 How can former military interpreters transfer their skills to language work in the UK? Miranda Moore investigates

When interpreter Habib Abdali1 came to the UK in 2010 he took whatever work he could find, helping on a market stall, delivering food, driving taxis, painting and decorating. He even worked crowd control at the London Olympics. “Whatever paid me, I did that.”

It was a big comedown from the senior role he had had in Afghanistan, working in bodyguarding, intelligence, reconnaissance and interpreting on a mission to train the Afghan Police. But he had already had to flee his country in circumstances he describes, understatedly, as “not so pleasant”, and he came to realise that there would be barriers to reestablishing himself elsewhere.

His experience of working menial jobs, despite his high-level qualifications and experience, will be familiar to many migrants.  One linguist who came to the UK under the ex-gratia resettlement scheme for locally employed civilians (LECs) from Afghanistan told the Sulha Alliance that he could not find work because he did not have qualifications from the UK. “That’s why I ended up in a warehouse. And I’m the person who can speak six languages, but the talent, the skills, and the knowledge [are] all wasted up here.”

Another former interpreter supported by the organisation, which campaigns for Afghans who were interpreters for the British Armed Forces, described his first three months in the UK as “the worst three months of my life”. Although there are organisations that offer a safe space and mental health support, Abdali says that practical help is often lacking.

Up to 3,000 former interpreters and their families could resettle in the UK following the acceleration of the relocation scheme in May, especially after Afghanistan fell to the Taliban in August. Although former British military commanders suggested that the number may be closer to 800, complaining that many applications are rejected “unnecessarily and unreasonably”,2 a significant number of Farsi and Dari interpreters will make it to the UK.

Many Afghan LECs who worked in other areas and do not have these language skills will also come, opening up job opportunities for newly arrived Afghan linguists, according to interpreter Mehdi Bahrami MCIL. “In recent weeks there have been rapid and growing requests and calls for Pashto and Dari interpreters from local authorities,” he says.

Whether or not new refugees will be able to access this work is less clear. Not all the interpreters who worked for the British military are eligible for ARAP (the Afghan Relocations and Assistance Policy that replaced the ex-gratia scheme in April), and those who have to go through the asylum process cannot usually work until they are granted refugee status. Those who come under ARAP have the advantage of being able to work and access education, benefits and healthcare immediately, with Leave to Enter the UK for five years and the opportunity to apply for Indefinite Leave to Remain after that.

Even so, it can be difficult to find work. Eddie Idrees, author of the autobiographical Special Forces Interpreter (Pen & Sword), came to the UK in 2013, the year the ex-gratia scheme began. He explains: “There were many obstacles, it wasn’t easy to get a job as an interpreter, even though I was an experienced interpreter.” Abdali came to the UK three years earlier and faced similar barriers. “Your criminal record, your passport, your security clearance – these are time-consuming obstacles that might stop you getting that job that you want. There’s a lot of paperwork,” he says. For example, when a person is new to a country, criminal record checks need to be done in the previous country of residence. When that isn’t possible there are workarounds, but they take time.

His advice is to network as much as possible and take whatever work you can get. Doing odd jobs enabled him to make friends and contacts, and get to know the UK jobs market and socioeconomic system. Nearly 10 years after he arrived, he now works with Migrant Help and the Home Office as a qualified interpreter in Dari, Pashto and English.

Idrees advises new arrivals to study and get UK-based qualifications. Najibullah Rahimi can testify to how important this is. When he started to apply for interpreting roles in 2015, he quickly found that his MA in International Relations, language abilities and professional experience in Afghanistan were not sufficient. He had worked as an interpreter, cultural mediator and political advisor for the British Royal Marines in 2004-05, and as a spokesperson for the Afghan Ministry of Foreign Affairs in 2007-08.

He began studying community interpreting levels 2 and 3, while also working towards the Diploma in Public Service Interpreting (DPSI). Combined with his previous work experience, the level 2 qualification allowed him to start working in areas such as housing and social care. He is now a fully qualified interpreter and runs his own migration consultancy business, NARN. Like Abdali, he stresses the importance of finding a regular income to fund interpreting studies and the exam.

“For some agencies you have to have 15 hours of experience of public service interpreting in the UK – in each language – so you need to get experience, even as a volunteer,” he adds. This is precisely how Bahrami got started, volunteering at an Iranian community centre to support refugees with welfare, housing and legal advice. “I was so passionate about this due to my own background as a refugee,” he says.

While it can be frustrating when your experience is discounted by potential employers, Rahimi stresses that the requirement for professional qualifications is valid. As a public service interpreter working in immigration, he has been called on to interpret for Afghan former military interpreters at asylum tribunals.

“Many times I’ve realised that the person was an interpreter for seven or eight years but could not communicate in court. They understand English, but not the language of the court. The terminology is completely different: if the prosecutor is cross-examining them, the barrister is asking questions, or the judge is giving a speech, they don’t understand. We must remember that there is a language issue, because their expertise was very specific.” He continues: “If you do the DPSI Law then you get familiar with the terminology of law. This is crucial to our job. You have to know what is ‘money laundering’, ‘sexual harassment’ and the difference between smuggling and trafficking.”

As a gold standard of interpreting, the DPSI is necessarily robust and not everyone passes the exam. This can be particularly problematic for candidates with limited resources, who may struggle to fund a re-take. Bahrami offers some words of encouragement: “do not get disappointed if you fail to pass a language exam for the first time. This is very important.”

For Abdali, unrealistic expectations are a major difficulty. He says that “false reporting from the UK and Europe” gives refugees the impression that positive change will happen quickly when they arrive. “These people are losing high-status jobs. You crash land from high above. You approach high-status jobs but you don’t get them,” he explains. His main advice, therefore, is to have patience. “Go with the flow while not forgetting the bigger thing that you want to go towards.”

Offering a combination of financial stability, mental stimulation and the satisfaction of helping people, interpreting is a dream that all the people I spoke to for this article said was worth pursuing. “And”, adds Bahrami, “in my experience, remember: even the most unbelievable dreams can be achieved.”

1 Some names have been changed.

2 Letter to the government organised by Sulha Alliance

The Linguist
1 month 6 days ago

The Linguist
2 months 4 days ago

The Linguist
3 months 2 days ago

The Linguist
3 months 2 weeks ago

The Linguist
4 months 14 hours ago