Ever since I was a little girl growing up in France in the 1970s listening to my elder brother’s Beatles, Rolling Stones, Elton John and David Bowie records, I was fascinated by the English language and wanted to understand the lyrics of my favourite songs.

As soon as I was old enough to learn it, English became my favourite subject at school and after completing an A Level in Arts, I enrolled at Aix-en-Provence University in 1989 to prepare for a BA degree in English with French, Spanish and Russian as other languages. This involved a year working abroad and I was lucky to spend a year in 1992-93 as a French language assistant in a Bournemouth high school preparing British students for their French GCSE and A Level exams. I enjoyed my year so much that I made up my mind that one day I would return to live in the UK for good. However, at the end of my year abroad, I had to return to France to complete my university studies and prepare for the very difficult national competitive exam of CAPES to qualify as an English teacher in France’s state secondary schools.

After passing my CAPES in 1995, aged just 24, I worked for three years as an English and French teacher in France; in 1998, I married my English fiancé Tim, whom I had met on holiday a couple of years before in England, and, after our wedding, I decided to join him permanently in his home county of Wiltshire where I started working as a freelance French and English teacher to international companies and language schools. I simultaneously enrolled at Wiltshire College on a 3-year RSA course to qualify as a bilingual executive assistant, specialising in business and law.

As soon as I qualified, I was offered a full-time job as a bilingual Commercial & Marketing Assistant for a large French agricultural group with a subsidy in Wiltshire. Following a restructure of the company a year later, I left to work as a Legal Secretary in a law firm for a little while before being head-hunted by a local wine-broking company who offered me an irresistible job as manager of their busy office; they had been looking for a multilingual administrator who could speak French, Spanish and Italian to a sufficient level to interact on a daily basis with their wine suppliers worldwide and were delighted to find me working for the firm of solicitors just down the road! I was quickly offered the position on the condition that I would learn Italian which I accepted gladly.

As a language teacher, I was able to teach myself Italian with self-study books and tapes which I complemented with conversation classes with a native Italian speaker recommended by the company (who ironically now works for my agency). I thoroughly enjoyed my five years working at the wine company; my job was to liaise between the wine suppliers overseas and the UK customers, mainly supermarket chains, off-licences and airlines and to manage the day-to-day running of the office. I would often translate documents, wine labels and wine descriptions and took a wine course to help me understand the terminology. I also acted as an ad-hoc interpreter at wine trade shows and visits of foreign suppliers as well as taking part in meetings and sometimes accompanying clients abroad.

This really sparked my interest in translation and interpreting. Sadly, when the business was bought out in 2006 by a bigger group, I was made redundant but soon found new employment as the Personal Assistant of a renowned British landscape architect who travelled the world offering his designing services to high-end clients internationally. In 2011, aged 40, I decided to embark on a new challenge and having gained a lot of experience working at management level in various companies using my languages, I created my own business: “Karine’s Languages & Administrative Services”, offering a range of linguistic and secretarial services on a freelance basis to private individuals and businesses as I had spotted a gap in the market in my rural area of Wiltshire where there were a number of international companies and private individuals with secondary homes abroad, all needing linguistic assistance from time to time.

I started with just myself, offering French, Spanish and Italian, the three languages I could speak fluently at the time. I offered tuition, translation and interpreting services in these three languages plus some ancillary business services such as secretarial, marketing assistance and liaising with other business partners overseas. Pace really quickened when I created my first website and I started getting more and more enquiries for other languages such as Polish, Portuguese, German, Dutch or Czech from my local community.

I did a lot of networking, always on the look-out for native speakers in my area with qualifications in teaching, translating and interpreting to match them with the jobs I started receiving regularly from local companies. Within just a couple of years, I became one of the most successful agencies in my region. However, with demand for new languages increasing, I had to canvas further afield to source more professional linguists.

And this is how I turned to CIOL’s online directory, Find-a-Linguist, to approach translators/interpreters directly and try to convince them to join my team. This was somehow harder than I anticipated as I was not a CIOL member then and my company’s name was totally unknown outside my area of Wiltshire/Somerset. I felt I had to work hard to prove my authenticity as a professional linguist to the CIOL members I was approaching who did not seem to take me very seriously despite my years of experience in the industry. This prompted me to seek CIOL membership for myself which I thankfully obtained fully in 2015. This immediately opened new paths to me; my very first CIOL Members’ Day introduced me to many successful linguists in various languages with different specialisms who expressed their wish to work with me, even those who generally refused to work with traditional agencies.

Armed with my new CIOL member status and the support of new high-calibre, enthusiastic colleagues (who have now become friends), I decided to expand my business, created a new website and aimed at working nationally and internationally, being no longer limited to my immediate South West region. New customers from all over the country started finding me on CIOL’s directory, Find-a-Linguist, and my market grew exponentially.

In 2017, after attending a wonderful talk given by Jane Galbraith at a CIOL Members’ Day about the advantages of becoming “Chartered”, I sent out my application and was thrilled to obtain Chartership in both Translation and Education. My new status of Chartered Linguist gave me a further major confidence boost and as word spread, I started receiving more and more offers of work and professional opportunities from not just the whole of the UK but other countries too and even from as far as Hong Kong! To express my gratitude to CIOL for fast-tracking my career, I volunteered my services to the Institute and joined the Translating Division Committee in 2018 to help promote CIOL and professional standards through regular translating events. I first started as Treasurer of the Division and one year later was elected Chair, which was a real honour; it enabled me to work closely with amazing CIOL members as well as international speakers, sharing our knowledge and skills mutually. Simultaneously, I have been using my background in education and previous work as a French teacher for the Ministry of Defence to assist the CIOL Qualifications team in moderating language exams for governmental organisations, as well as the DPI and DPSI exams. This has further enhanced my experience in working with languages and fellow professional linguists.

I am immensely grateful to CIOL for all the support it has given me ever since I joined; I can honestly say that as far as I’m concerned, there has definitely been a “Pre CIOL” and an “After CIOL”. My career was given a tremendous boost after I joined and especially after I acquired Chartership status. I am infinitely grateful to CIOL for providing me with such incredible opportunities and to have become a very proud ambassador of it in the profession and beyond. I look forward to many more years of being a member and to exciting new events. 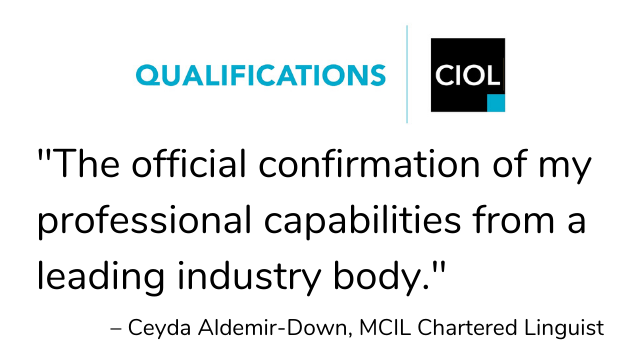 How the DipTrans helped my career in translation 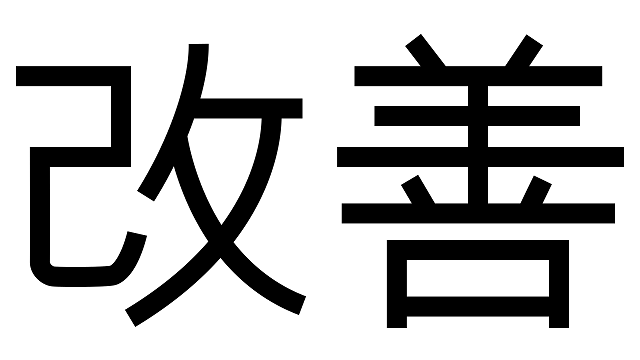 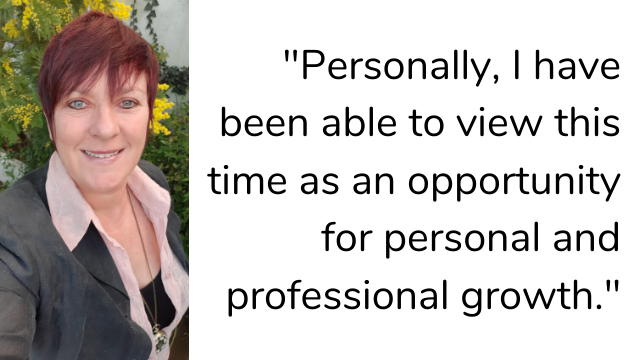 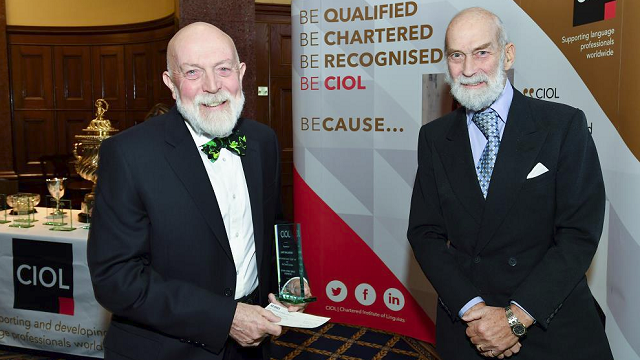 Being qualified as an interpreter 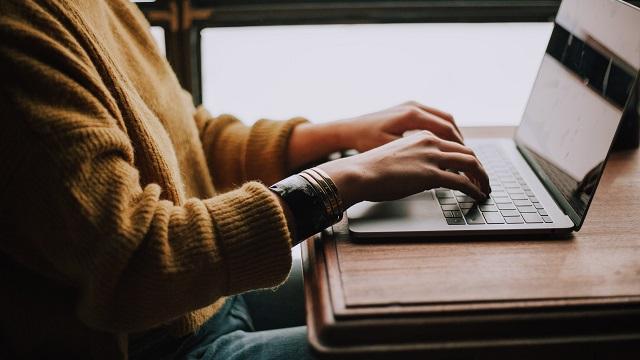 How Our Mentoring Platform Can Provide Valuable Support 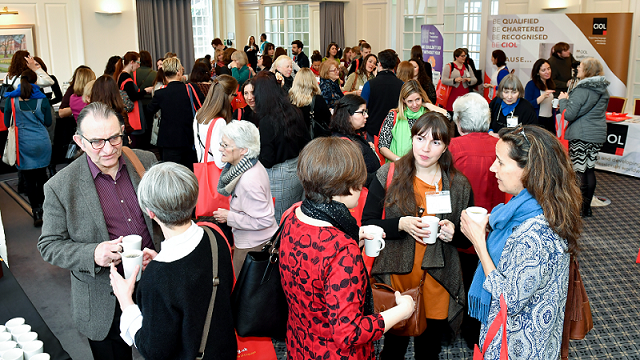 A community of linguists 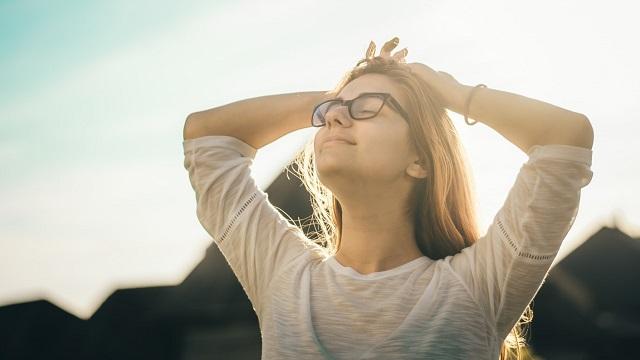 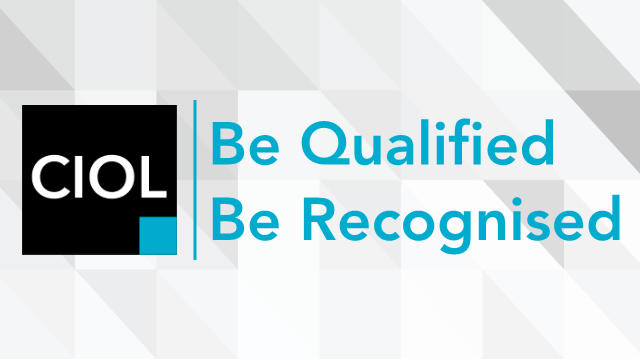 The DPI qualification: a candidate's perspective