Reproduced from The Linguist 61-1 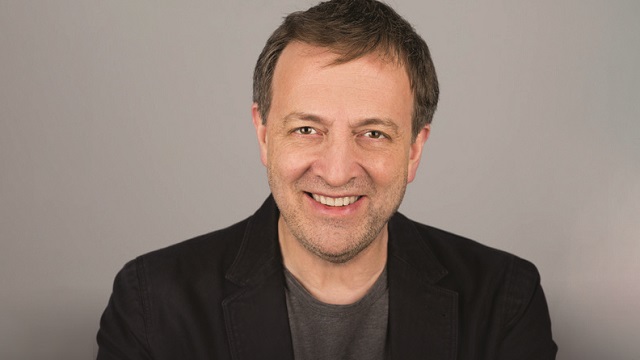 The author of Nemesis and McMafia speaks to Miranda Moore about the role of languages in his life.

As an undergraduate studying drama with German at the University of Bristol in the mid-1970s, Misha Glenny got involved with a group of activists fighting censorship in the Eastern Bloc. “They would smuggle books and dismembered Xerox machines to the opposition,” explains the author of McMafia and DarkMarket. As his fascination with the politics of Eastern Europe grew – galvanised in part by his father’s interests as a translator of Russian literature – so too did his thirst for knowledge of the countries and their people.

H already knew that he wanted to be a foreign correspondent. Where he differed from other young idealists emerging from adolescence at the time was in his conviction that gaining an in-depth understanding of the area would involve learning at least one of its languages. He opted for Czech out of pure convenience: while living in Berlin as part of his university course, he made friends with a Czech man who was able to cross the border freely because his wife was German. They spent a week touring Prague together.

“It was a very dramatic time politically, with [the human rights advocacy group] Charter 77 having got off the bat, so I started teaching myself Czech,” he says. A month-long summer school in Prague and 10-month postgraduate research trip saw him reach relative fluency.

Now a professor at UCL and consultant to governments on transnational organised crime, he also speaks Portuguese and Serbo-Croat, plus rudimentary Hungarian, Albanian and Russian, and can communicate in most Slavic languages. As we talk about his life – from BBC Central Europe Correspondent during the 1989 revolutions to public speaker covering topics such as cyber crime and fake news – it becomes clear that Glenny’s primary motivation for language learning has always been a burning interest in the related politics and people. “I was so interested in Germany, Central Europe, Russia, South-Eastern Europe – Yugoslavia in particular – and that is what drove me to learn languages. I didn’t see it as a burden; I really enjoyed it.”

As a child, his home was filled with books in Cyrillic script and languages that he didn’t recognise. Before Glenny’s father, Michael, became a translator and academic, he was a European sales manager for Wedgwood, and the family travelled to Belgium, Germany and Spain for holidays, as well as staying with family in the Netherlands. “We were swamped by a sense of being European – something I feel very, very strongly about to this day.” (He is relieved to have kept his EU citizenship via an Irish passport “by dint of the intelligence of my paternal grandfather in being born in Newry, County Down”).

It is not by accident that his sister also became a linguist, studying Russian at Sussex and Harvard universities, while Glenny was absorbed in international affairs and the Cold War by the age of 12. It was his father, of course, who taught him to read Cyrillic, but his mother Juliet who found him a three-month placement in Germany that would have a lasting impact. After years of studying French (which he “was never that fond of”) and then Latin and German at school, he spent the first term of his A levels at a Gymnasium in Korbach, Hessen. “It made me appreciate German as I appreciate no other language; it’s marvellously expressive,” he says. A weekly civics lesson had pupils discussing articles from Der Spiegel. “So from the age of 16, I was reading German press as well as the British press and, of course, that gave you a very different perspective on Europe.”

Glenny would later learn to speak German with a Viennese accent. Moving to Austria as a BBC stringer in 1986, he arrived just as news was breaking of presidential candidate Kurt Waldheim’s past as a Nazi Intelligence Officer. The story took him to Zagreb and Belgrade. “I started to use my Czech in order to read the papers in Croatia and Serbia. In Serbia, most of it was in Cyrillic, but that’s where the Russian helped,” he says. Before long, he was reasonably fluent in Serbo-Croat.

In those days, Central Europe was seen as something of a backwater, so when the BBC’s correspondent retired in 1988, only three people applied to replace him. “I was the only one who had been working regularly in Eastern Europe at the time, and I spoke Czech, I had some Hungarian, I had Serbo-Croat and I had German. For the World Service it was a no-brainer,” Glenny explains.

“Those of us who were in Vienna knew that the tectonic plates were shifting in Eastern Europe, that things were about to go up.” When the revolutions happened, he was perfectly positioned, and not just because of his language skills. “I knew most of the Cabinet members of the first democratic Czechoslovak government as personal friends because they were all Charter 77,” he explains. “And in Yugoslavia, the fact that I spoke Serbo-Croat put me out in front.”

Speaking the language of a conflict zone is also a matter of personal security, and being able to determine whether someone was a Bosnian or a Serbo-Croat was vital. “In Bosnia they speak a variant called Ijekavski, unlike a Serb from Serbia, who speaks Ekavski. By just asking one or two leading questions you immediately know whether you’re dealing with a Serb or a Bosnian,” Glenny explains.

In a particularly hair-raising incident, he was crossing the front line between Croatia and the self-proclaimed Republic of Serbian Crina with journalist and broadcaster Kirsty Lang, who he later married. The Serbian soldiers allowed him to pass but instructed him to leave Lang behind. “I was able to become indignant speaking Ekavski and brandishing a copy of [the Serbian paper] Politica, and I said in a very heavy Serbian accent, ‘I’m a Serbian brother-in-law, this work is very important.’” It was a nomenclature he was entitled to because, at the time, he was married to a Serb; he used it only twice “to save people’s lives, or at least to save them or me from a very nasty fate – Kirsty on this occasion.”

Glenny’s later research took him to places whose languages he did not speak, notably for McMafia: Seriously organised crime – an exploration of organised crime around the world. So did the lack of language skills leave him feeling exposed? “The key thing if you’re doing research like that: you find your fixer and your translator first of all. I was very reliant on them,” he says. “I needed interpretation for Brazil, because I didn’t speak Portuguese at the time; I needed it for South Africa because some of the interviews were in Zulu or Xhosa; I needed it for Japan and China.”

He returned to Brazil for a deeper dive into the drugs trade, staying in Rocinha favela in Rio de Janeiro for three months while researching Nemesis: One man and the battle for Rio – an experience he describes as very hard due to the poverty and deprivation. For Glenny, telling the story of the drug trafficker Antônio (Nem) Francisco Bonfim Lopes meant studying Brazilian Portuguese, but learning a language aged 53 proved to be a little harder than learning in his teens and 20s. He admits that living in a favela, where even the interpreters had no idea what some words meant, with intermediate language skills was “totally ludicrous. Brazilian Portuguese is highly dialectal, and they didn’t just speak Carioca (Rio Portuguese), they spoke Rocinhan.” But the interpreters who accompanied Glenny to Campo Grande prison, where Nem is serving a 96-year sentence, got to know when he was following the exchange and when they needed to step in.

Ever fascinated by dialects and the connections between languages, he took delight in inadvertently adopting Rocinhan vocabulary. “I would use the phrase X nove, which means a confidential informant of the police working inside the cartels, and when I was talking about it to my publishers in São Paulo, they all burst out laughing because they couldn’t believe this English person, stumbling through Portuguese, would suddenly come up with a sort of insider phrase like that.”

Production on a Hollywood film of Nemesis is due to start this year, while Glenny’s books have been translated into 33 languages. Screen adaptations bring a whole new – and much broader – audience, and his first experience of this came with the TV drama McMafia. Working with a “dream team”, including screenwriter Hossein Amini, it gave him “a rather false sense of the TV industry, which in fact is a very difficult industry indeed. As an Executive Producer, I was in the writers’ room. It was just such fun – it was glamorous and everything you think it would be.”

When it came to the book translations he was slightly further removed, but happy to field questions on any misunderstandings or ambiguities in the text. “I’m a great admirer of translators,” he says. “Until very recently, they were very rarely recognised for the extraordinary work they do.”

With works spanning money laundering, corruption, the dark web and criminal hackers, Glenny now also works as a consultant and speaker. If he is going to address audiences in a language other than English, he prefers to arrive a week in advance, so he has time to slide back into the other language. “I like to immerse myself, so that I’m ready to speak conversationally in a formal situation,” he says.

“I have to say that the way my career has developed as a journalist and writer is inextricably linked with language learning. I couldn’t have done anything I’ve done without languages and that remains true to this day.”

The Linguist
5 days 14 hours ago

The Linguist
2 weeks 5 days ago

The Linguist
4 weeks 12 hours ago

The Linguist
5 months 7 hours ago

The Linguist
5 months 4 weeks ago

The Linguist
6 months 3 weeks ago