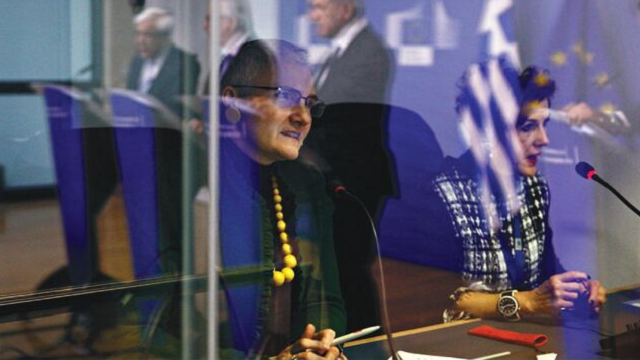 I am a visually-impaired (VI) interpreter and have been on the European Commission staff since the early 1990s. There were already some VI interpreters working as freelancers for the EU Institutions at that time. We have certain challenges in common, but have devised our own strategies and methods for dealing with them. Our work has changed considerably over the years due to the increased use of IT.

When I started, meeting documents were only available on paper and it was almost impossible for me to prepare meetings in advance; I even relied on colleagues to tell me the items on the agenda! Today, most documents are available electronically before or during a meeting. We also have access to glossaries and other sources of terminology.

Some VI colleagues are more tech savvy than others and we do not all use the same equipment or operating system. I use a type of Braille tablet with a refreshable Braille display to access information during meetings. It has similar functions to a standard tablet, but it has a physical keyboard and a Braille display, made up of pins which move up and down to show the characters which would normally appear on the screen. The display technology is very expensive, so rather than a full screen there is just one line.

The translation into Braille is accurate and instantaneous, and the user can switch the Braille code to match the language of the text that is being read. This technology has improved over the years and the tablets (traditionally known as Braille notetakers) have become quieter and more portable.

As for the operating system, I use a Windows PC at home, mainly because it is what I’m used to. My Braille tablet happens to be Android-based, but my iPhone can connect to it via bluetooth. The phone’s screen can then be read in Braille, as opposed to synthesised speech, which isn’t suitable for use in the booth for obvious reasons. Some people prefer to use this approach as their main working method in the booth, but I like to store and read my work documents on the tablet itself, as I find the search and navigation functions simpler, more powerful and more intuitive. I don't use a computer in the booth, but at home I find the PC much more efficient than the tablet for meeting preparation.

Websites are not always fully accessible, but this has improved considerably and VI interpreters are now consulted whenever new sites for use by interpreters are developed. Some websites can be difficult to navigate if they are not designed using standard code. For example, a table may look fine visually, but if it is not coded properly it can be almost impossible for us to move through the rows and columns and make sense of the content, even though the actual words are readable.

When graphic symbols do not have text labels it can be very frustrating. Sometimes it’s possible to get around this by using the OCR (optical character recognition) function, which is now built into screen-reading software, but that requires a fair degree of technical knowledge.

In recent years, the analogue consoles have been replaced by digital systems. VI interpreters didn’t have any major difficulties with the old consoles, and shared tips and tricks such as turning up the loudspeaker slightly in order to monitor the microphone status. The newer systems offer more advanced features and it is important that they remain fully accessible. Representatives of VI interpreters take part in discussions with manufacturers when they are designing new models. This has led to enhancements such as audible beeps to enable us to hear when the microphone is turned on or off, and to indicate whether we are on ‘double relay’.

To work in this way, we need to tune the console into the language channels we require, using the buttons known as relay presets. Sighted interpreters set these channels using a visual display, but visually-impaired interpreters use a different method: modern consoles provide us with a reliable means of locating the beginning of the channel list, and we then rotate the tuning knob, counting the number of ‘clicks’ required in order to reach our desired language. This has become even more important during the pandemic, as interpreters now often work alone in the booth.

Interpreters work in many different buildings and meeting rooms within the EU institutions. Assistance is available if required, depending on a person’s mobility and preferences. When we enter a building, we can request that staff at the reception call someone to accompany us to our booth. This is extremely helpful in less familiar environments, but the disadvantage is that we cannot expect people to be available immediately.

I prefer to learn the way to the booths if possible, as it can be stressful to rely on someone else. However, if I only work in a venue occasionally, it wouldn’t make sense to learn all the routes in detail. In addition, I have found that some familiar environments have become slightly more difficult to navigate since the pandemic, as the physical location of our booths is constantly changing. This means that I often have to ask colleagues to help me locate my booth.

We are sent a seating plan in advance, showing a visual representation of the booth layout. I usually print this and take it with me in case I am offered help by a non-interpreter. I need to concentrate on the route to the booth and make a mental note of its location, so that I can easily find it again independently during the day. It’s not a serious problem though and people are always happy to help.

I am sometimes asked whether not being able to see the delegates in the meeting room poses a major problem for us. Of course, this visual feedback is extremely important for sighted interpreters, and it can certainly be helpful for us to be aware of what is happening in the room. However, as a blind person I am not accustomed to having this visual information in my daily life, and so I do not really see it as a problem in most circumstances: we interpret what we hear and we are not expected to provide an audio description service.

Information about the context is much appreciated, particularly if a major international incident has occurred (for example, if Delegate A has just spilt coffee all over Delegate B’s computer), as any reaction then makes more sense! However, I am not aware of cases where the absence of visual feedback has led to specific and significant inaccuracies of interpretation by VI colleagues.

One size doesn’t fit all

Of course, VI interpreters have certain specific challenges in common and it is good to compare notes, but we have our own individual ways of handling them based on our different personalities, abilities and preferences. People tend to know who the visually-impaired interpreters are and, for me, one of the main challenges of visual impairment is the lack of anonymity (which is why I have chosen not to put my name to this article). However, not everyone shares this view.

Working in the EU institutions, it can appear that there is a disproportionately large number of visually-impaired interpreters, as opposed to VI people working in other professions. However, from each country there are, at most, only one or two VI interpreters, and more commonly no VI interpreter. It’s just that we tend to attract a certain amount of attention because we all work in the same place, and the nature of the work makes us fairly visible.

I believe that it is very important for people, including linguists, to choose a career which is the best match for them, regardless of visual impairment, as far as possible. Given the current state of technology, some professions may not be possible (e.g. bus driver, brain surgeon), but there are blind people working successfully in careers such as teaching and translation. In the 21st century it would be inexcusable for any large company or organisation to exclude a disabled person from employment simply because they had not seen fit to make their software accessible.

I very much enjoy my work. No one is infallible and problems are bound to arise occasionally, but good communication is part of the key to success.

The Linguist
2 months 1 week ago

The Linguist
2 months 3 weeks ago

The Linguist
3 months 2 weeks ago

The Linguist
6 months 3 days ago

The Linguist
6 months 2 weeks ago