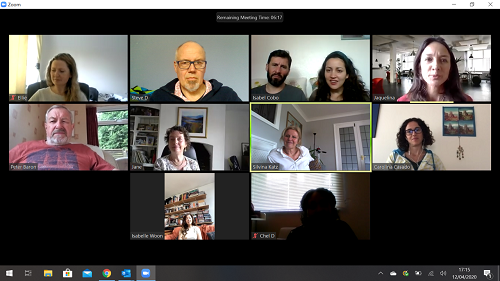 11 v 10:  a team of Midlands- and London-based linguists tackle ‘Diego Maradona’, a documentary film about football’s famously talented yet controversial figure, who wore the number 10 jersey while enthralling crowds and confounding defenders during the 1980s, before off-pitch scandals brought a much-trophied career to a premature close.

The CIOL Midlands-hosted Zoom discussion took place over Easter. With diverse contemporary footage drawing extensively from Maradona’s upbringing in Argentina then his rise to unparalleled stardom and subsequent fall from grace in Italy, the film gave participants a wealth of Spanish and Italian language material to discuss.

Our special guest, Jaquelina Guardamagna, gave her insider’s perspective as one of the team of translators who worked on the archive footage, and she explained how the focus of the documentary had changed over the course of its making. The effect, as Jane Martin pointed out, was a film whose narrative arc followed that of a classical tragedy. Chel Dowdie observed that this story of intense adulation followed by violent persecution was particularly appropriate to watch at Easter.

This was the first event of its type held by the CIOL Midlands Network in response to the restrictions on movement currently in place in the UK. It has had very positive feedback from the participants, as it offers an easy way to stay connected with our language community during lockdown. We look forward to holding similar online events over the next few weeks, and we hope to transfer them to a face-to-face format in the future.

Join members of the Midlands Network for a remote film night via Zoom. You are invited to watch the film 2019 “Diego Maradona”, directed by Asif Kapadia, and then join in a remote meeting on Zoom to discuss the film and reflect on its message. Our special guest at the Zoom meeting will be Jaquelina Guardamagna, Chartered Linguist and one of the team of professional translators who worked on the film.

The film is available on All 4. You can watch it for free but you need to create an account. Constructed from over 500 hours of never-before-seen footage, including interviews in Spanish and Italian, this tells the story of the infamous Argentinian football player Diego Armando Maradona, who played for S.S.C. Napoli in the 1980s. It offers a fascinating insight into his rags-to-riches trajectory and the consequences of fame. It is highly recommended even for people who don’t normally watch football!

The Zoom meeting will be on Sunday 12th April at 5 p.m. so please make sure you have seen the film before then. You will receive a link to join the meeting by email, together with a few discussion questions to think about if you wish. Feel free to bring a glass of something to the discussion! We aim to recreate a face-to-face film night as closely as possible.

New to Zoom? Join the meeting 10 minutes before the discussion starts to explore the platform and find the main features we will use in the discussion (video call, chat box and the ‘raise your hand’ function).

Please email eleanorbridgwood@gmail.com if you would like to take part.

Watch the film at any time.

16:50 Join the meeting if you have never used Zoom before and want to explore the platform.