First published in The Linguist 56/4 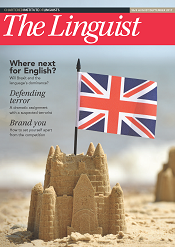 In May 2017, Jean-Claude Juncker, President of the European Commission, announced that he would speak French at a conference because, after Brexit, “slowly but surely English is losing importance in Europe”. As premature statements go, that must rank among the greatest. Of course, there were some who applauded it. The emotional baggage that comes with an internationally used language is not always positive.

There are doubtless many in France, for example, who regret the way French has lost its 18th-century status as the default international language. But the facts speak against Mr Juncker’s wishful thinking. In Europe, more than 90% of secondary-school students are studying English, a percentage that has steadily increased over the years. This trend is reflected worldwide: English is by far the most popular language in schools and further education. In the past decade, more countries have recognised the language’s position by introducing English into their educational system (e.g, Rwanda and Gabon) or making it one of their official languages (Burundi and South Sudan).

For internal political reasons, the direction hasn’t always been one-way: Madagascar made English official in 2007 and reversed its decision in 2010; while in 2015, Tanzania dropped English as the language of school instruction in favour of KiSwahili. But even here, the picture is the same: a slow and sure increase in the numbers who are learning English.

In the first edition of my Cambridge Encyclopedia of the English Language (1995), I collected estimates for English speakers in 75 countries where English has held a special place. It makes interesting reading to compare these totals with those in the second (2003) and third (2018) editions. There has been little change in the number of first language (L1) speakers: 377 million in 1995 compared with 388 million today. But there has been a huge increase in second language (L2) speakers: 98 million in 1995, 422 million in 2003 and 885 million today. For world use, I arrive at a total of just over 2.3 billion in the third edition – an increase on the most frequently quoted totals of 1.5 billion in the 1990s and 2 billion in the noughties.

All statistics are guesstimates, based on a conflation of whatever sources can be found: no territory gathers precise figures about the number of its people who understand, speak, read or write English, or their attainment levels; and while the six stages of the Common European Framework are widely recognised, there is no information about the way these relate to mature usage throughout a society, whether in Europe or beyond. Repeatedly, websites about the use of English in a specific country give only vague descriptions such as ‘widely spoken’, ‘chiefly used in cities’ and ‘few fluent speakers’.

Anyone wanting to arrive at a first approximation has therefore to conflate information from whatever sources can be found. In my case, I combined what I could discover about the number of students studying English in secondary and higher education, occasional reports issued by such organisations as Eurobarometer, Euromonitor International and the British Council, visitor guides, the views of embassies, and the anecdotal impressions of people living in a country (now very common on the internet).

I looked for no more than an affirmation of an everyday conversational level of ability, and I included English-based creoles and pidgins. If there was a range of estimates within a country, I went for the lower ones. And even if my conservative estimates are out by a few percentage points, they are nonetheless useful as an indication of growth, for I used the same criteria in each edition. Everywhere reports the same story: greater demand for English from the business sector, an increase in the numbers taking EFL (English as a foreign language) examinations, and a huge impulse towards the language from younger people, for whom it is the chief medium of entry into their cultural and digital world.

Most linguistic debates end up as political, economic or cultural arguments, and this is certainly the case here. There is the ‘outward-looking’ argument: the 230 million EU citizens who speak English1 make up only 10% of the world total, where English is unquestionably the dominant language of trade and technology, and likely to remain so for the foreseeable future. So if the EU wants to trade with the rest of the world it will have to respect global linguistic realities.

Then there is the ‘inward-looking’ argument: the 230 million English-speakers represent 51% of EU citizens. Member states have made huge investments in English, and are unlikely to be willing to participate in EU affairs in another language, even if agreement could be obtained about which language that should be. The membership of Ireland, and official status of English in Malta, would, in any case, require the ongoing recognition of English as one of the EU’s languages. As Marko Modiano writes: “When the dust settles, there is every reason to believe that English, because of its utility, will have the same role within the EU as it maintains today.”2

I agree with that, but would add that its linguistic character is likely to change. I would be surprised if all the British people working in the translating and interpreting departments of the European institutions were to leave. Their combined linguistic and editorial experience, and their familiarity with the EU corridors of power, would be impossible to replace in the short term – and even if they did physically exit, their linguistic intuitions could readily be accessed, wherever they lived, at the click of a mouse. However, without daily routine interaction with L1 speakers, it is very likely that a new kind of English will emerge in the administrative corridors – a development of what is already being called Euro-English.

The Euro-English of the future will significantly differ from what we see today, where the notion usually refers only to the EU-specific jargon of written documents and spoken

in-house discussion. If the EU becomes a genuine post-Brexit community, I would expect to see Euro-English evolve in the same way that we have seen in other countries where ‘New Englishes’ have developed. These are multiglossic situations where, alongside the use of a formal variety in speech and writing (e.g, British Standard English), we find a regional variety reflecting a unified local cultural identity, and expressed through local vocabulary and idiom in an array of styles.

Euro-English has every chance of developing into a New English, and Brexit could make this more likely. But this will only happen if the conditions are right, and the chief condition is a shared cultural identity. The central question therefore is: can such an identity be claimed for the EU? What are the shared cultural characteristics that would motivate such a development? This now ceases to be a linguistic argument and becomes a discussion about the relationships between countries, national identities, and the political future of Europe.

Is there any real notion of an EU ‘social group’ – one that displays sufficient solidarity (in the sociological sense) to motivate shared linguistic norms? There is a considerable amount of variation in stylistic practice among the various departments of the EU, as I have described elsewhere.3 We already have a Europe of infant Euro-Englishes. So if the answer to these questions is ‘no’, the most likely scenario is that these variations will mature. English will not disappear; it will become a family of Euro-dialects.

Englexit? Only in the sense that British English norms may become less of an influence on the way these Euro-Englishes develop. The Englishes of the rest of the world, and especially in countries with which the EU continues to trade, are bound to make a greater impact on the way the language is used in Europe. It will not be that big a deal, as only a small percentage of words, idioms, constructions, pronunciations and orthographic conventions vary from one regional English variety to another. But they will be enough to distinguish, say, a French Euro-English from a Danish one from a German one. The probable outcome will be a new Englentrance, and the EU will, slowly but surely, need to come to terms with it.

The Linguist
3 months 4 days ago

The Linguist
4 months 3 days ago

The Linguist
5 months 1 week ago